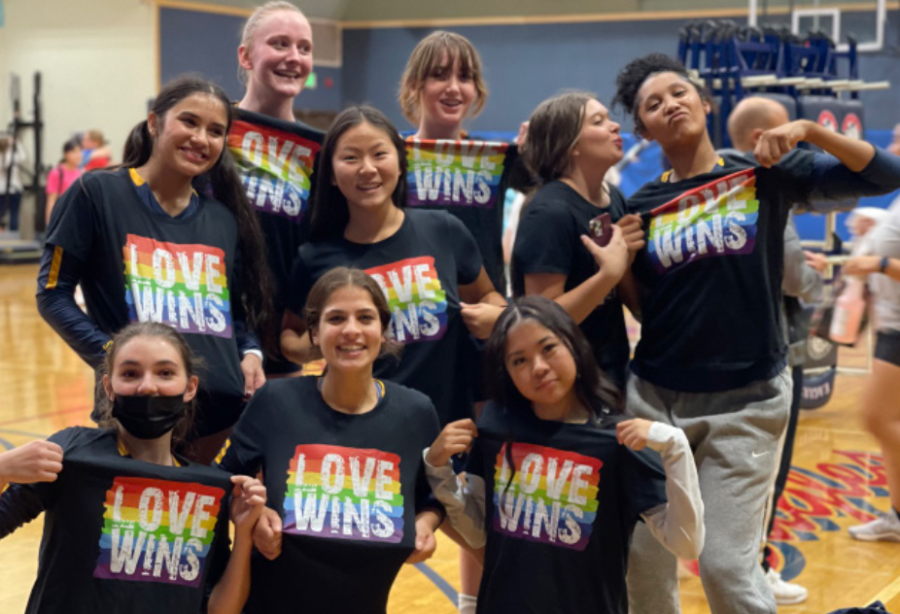 What’s So Wrong with a Rainbow?

On September 14th, 2022, the Annie Wright volleyball team wore rainbow pride shirts to the game against Life Christian Academy (LCA), with the slogan ‘Love Wins’ written across the front as a protest against policies stated in the LCA’s Handbook. Beforehand, the team had learned that the LCA handbook contained a passage stating that “All students must agree to and abide by this statement on marriage, gender and sexuality. Students who violate the policy will be subject todiscipline, up to and including expulsion.”

The team found LCA’s policies disturbing enough to decide to peacefully protest the handbook. After the game, a local Tacoma restaurant, Crisp Greens, learned of their protest and voiced its solidarity with the AWS volleyball team on Instagram. This is when the Instagram post and the volleyball team started receiving lots of positivity and attention within the Tacoma community—both online and off. People from all across the area who had attended LCA started sending their stories to the AWS athletes.

When asked how the idea to wear the shirts originally occurred to the team, senior co-captain Kiran Hutchinson (USG ‘23) said, “Our teammate Amelia and her mom came up with the idea, and proposed it to the team, and we were all on board.” What Hutchinson didn’t anticipate was the impact the shirts were going to have. Hutchinson also expressed how she felt supported by the athletic department in particular, but not so much by the administration. “I think that is because they need to be more careful about the positions they take on issues,” she says in regards to the Annie Wright Administration’s stance on the topic. According to the team “we were highly supported by the outside community and only received hate from LCA itself and a small group of people.” The team felt supported with the amount of love and solidarity they were receiving from Annie Wright students and beyond.

Below is a statement from the Annie Wright Administration on the volleyball team’s protest: “Here at AWS, we support students using their voices to share their individual beliefs and to speak up for human rights, and it’s clear that the volleyball team worked to do just that. We believe our job as educators is to prepare graduates to head into the world ready to take courageous independent action. This group of students is certain to live up to this charge.”

A former student of LCA, Hannah Blauser, was the first person to call out LCA for their handbook. While Blauser was a student at LCA, she felt like she was brainwashed and remembers “leaving bible class feeling sick to my stomach.” When asked to describe LCA she said “[Life Christian Academy] continue[s] to spread this message that looks like we just love everybody, but underneath everything there’s limitations to that and that should never be the deal.”

After graduating from LCA, Blauser posted a YouTube video titled ‘The Truth about LCA,’ prompted by the removal of her and her wife’s wedding photos from the LCA alumni Instagram page. Before the wedding photos were taken down after being online for less than 24 hours, Blauser said “[LCA is] going to take down our post by the morning, they don’t respect me or my marriage.” Blauser was exactly right. She felt hurt, but most of all, betrayed. “they proved me wrong, then they proved me right… I thought they actually changed.”

Because of the domino effect of the team’s “Love Wins’ shirts had, the AWS protest was able to get back to Blauser. “A parent of a child at Life Christian sent me the Facebook post of AWS’ love wins shirts after seeing my video calling [LCA] out,” said Blauser. Seeing the protest gave her hope, and made her want to keep fighting after her video didn’t get the attention she wanted. “It’s so validating knowing people care and social media is being used in a positive way with sharing things and bringing things to light.”

A few pieces of advice Blauser would give to anyone, but specifically kids facing homophobia from fellow peers, schools and family would be “do what’s safe right now, and once you are in a safe environment, fight for the kids who are like you. Make them feel supported… pretend to be strong, and once you’re safe, go to therapy.”

Even though the initial plan was to simply protest Life Christian’s handbook, the team continues to wear the pride shirts during their warm ups. Their goal is to make people aware of the persistence of homophobia that exists even in areas like Western Washington that are widely considered to be progressive.