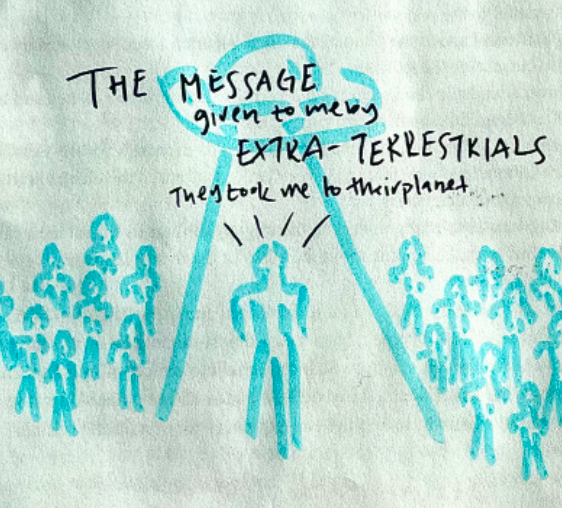 In “The Book Which Tells The Truth,” Räel talks of an encounter he had with an alien race.

Raëlianism: founded in 1974, this religion is the largest UFO-based religion in the world. It boasts a following of over 100,000 members as of 2018. From passing out thou- sands of condoms to Roman Catholic high school students to attempts to reclaim the swastika, Raëlianism is often shocking, strange and cultish in its movements. It is a religion that touts it founder as the half-brother of Jesus and promotes the idea of a geniocratic government system in which only those 50% more intelligent than the average population can hold office. Its teachings tell of technological advancement beyond human imagination yet strongly refute the theory of evolution.

It is easy to simply make a spectacle of religions like these: to scoff in disbelief at their values and actions, and then move on to the next thing. However, religions like Raëlianism provide valuable social and societal commentary when one begins to look beyond the surface. Where does Raëlianism come from? What is its appeal? These are important questions to ask if we want to gain a better understanding of our society as a whole. “The main reason scholars of religion would be interested in this [UFO-based religions] is because it tells us what we think religion is generally,” said Dr. Jennifer Callaghan, who earned her PhD in American Religion, “Why would they found a UFO religion?”

“
Religion is where we put the things that we can’t verify, or that re- quire some sort of faith or some sort of sense of mystery.”

One explanation for the rise of UFO-based religions has to do with the modern replacement of thetheological by the scientific. This can be described as “the death of God.” The metaphysical, the supernatural: this means of analyzing the known and unknown has been phased out in favor of the scientific, the physical and the observable. No longer does God hail from the heavens, but from some other star or planet more scientifically or technologically advanced than Earth. To a portion of humanity, the most far-reaching of science is still more plausible than the theological. This is the idea that Raëlianism, and other UFO-based religions, capitalize off of.

In his first book, titled “The Book That Tells the Truth,” Raël, formerly known as Claude Vorilhon, describes his encounter with a member of the Elohim race—a race of peoples that inhabit a distant, technologically advanced planet that created the human race as a science experiment, with Earth as their Petri dish. Raël describes how the alien creature tells him the correct version of the Bible. God is Yahweh, the leader of the scientists running the experiment, and Satan is the leader of the Elohim faction that protests the experiments and research Yahweh runs. Heaven is but immortality achieved via serial cloning on the planet of Elohim.

The Elohim race is astounding in its advancement: they have mastered the art of human cloning as well as designed biological robots that perform all the arduous labor on their planet. Raëlianism takes this idea of vast, but plausible, technological advancement and uses it to replace the idea of God. At the time of the founding of theological religions, such as Christianity or Judaism, it was widely believed that the explanation for all the things humanity could not understand was some god—some metaphysical, omnipotent being. Contemporarily, there are now a considerable amount of people that reject this idea. They favor instead the idea that everything can be explained by science—even the science that humanity is yet to discover or understand. Thus the idea of Elohim and its inhabitants a futuristic and technologically advanced planet with intelligent life that pulls Earth’s strings becomes to them more palatable, more believable, than the idea of God. “Religion is where we put the things that we can’t verify, or that require some sort of faith or some sort of sense of mystery,” Callaghan explained. In humanity’s postmodern condition, that faith is in anything labeled as science.

“But, there are all kinds of people who do UFO science, right? What makes founding UFO religion more appealing than UFO science, a UFO business or just a UFO book group?” asked Callaghan. The answer, she believes, lies in religion’s search for meaning. “Religion is used to justify particular types of political agendas, or to create a system of reason that provides a blueprint for what us humans were put on this Earth to do,” she explained.

Raëlianism strives to unify society: to establish one universal language, one universal vision. A society that is integrated in terms of race, gender and sexual orientation. It believes in the full automation of labor where humans could live a lavish life with all of the production being passed onto biological robots. They believe no animal should be made to suffer unnecessarily. They work tirelessly to spread the word of their claimed mastering of human cloning: cloning that could help infertile individuals have children of their own, cloning that could revive deceased love ones and children who died untimely deaths. They look forward to a fated Golden Age: Yahweh will one day grant humanity a terrestrial paradise, providing any and all technology needed for eternal bliss.

Eugenics, geniocratic philosophies and interraciality fetishes: these are among the glaring problems that come with the Raëlian ideologies. However, no religion comes without fault. Beyond these issues, delving into the core of Raëlian belief, we can see that perhaps their values are not so fundamentally different from those of other religions or social movements. Unity, peace and a promised paradise: are these not things that humans are narturally inclined to long for? Like the nature of its founding, Raëlianism’s variations on these wishes have to do with its dependence on modernity and postmodernity. The founders of ancient religions did not yet understand the concept of capitalism, but Raëlianism considers labor and exploitation in-depth and regards modern work culture as a prison and boldly rebukes work culture. The founders of ancient religions did not understand the modern concept of racism (let alone anti-racism,) but Raëlianism explains that all human races were selected winners of a competition among biotechnologists to create the perfect prototype: all flawless, all exquisite, each in their own way.

It is this modernization of traditional religious concepts displayed throughout Raëlianism’s founding and development from which we can draw understandings of contemporary societal and human conditions. The fundamentals of human desire and fear have not changed drastically over the centuries—it is the surrounding social constructs that have morphed into structures unrecognizable by BCE philosophers. Raëlianism is a fascinating case study of how religion and its tenets have likewise evolved in order to keep up with popular social rhetoric of the time. The postmodern condition is one that is both captivating and elusive: UFO-based religions provide a small window into the soul of our society.