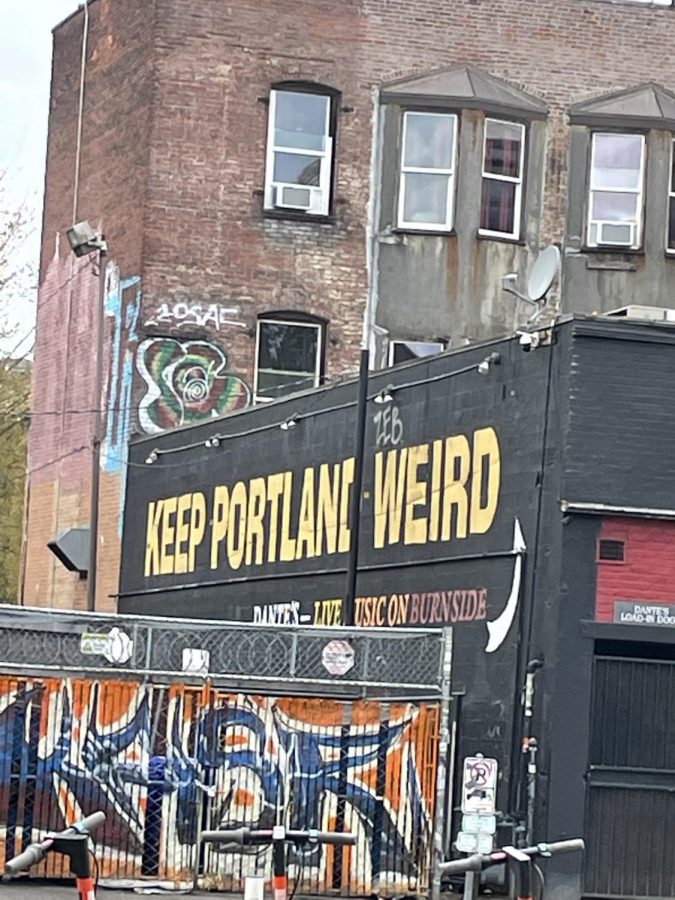 A “Keep Portland Weird” mural across from Voodoo Doughnuts.

Keeping it Weird with “Portlandia”

The culture of Portland, Oregon, is not a hard thing to find humor in. Pro-vegan stickers, tote bags and cheesy food puns can be seen at every food cart and donut shop. Said to be the city where young people go to retire, there is plenty to see and more to be entertained by.

Each episode of “Portlandia” takes a slightly different approach to poke fun at stereotypical Portland culture through around five unique sketches. These sketches seem to parody every aspect of both sides of Portland—those whose neighborhoods are being gentrified and those doing the gentrifying. On the uppity side of things, the show’s creators Fred Armisen and Carrie Brownstein parody farm-to-table restaurants, parents’ plans to get their academically average toddlers into fancy private preschools and performative activism. Armisen and Brownstein also take stabs at white people with dreadlocks and/or muttonchops, feminist bookstores, Portland’s extremely hippy-ish annual music festival, Pickathon, and even religious cults.

Many segments lampoon exhibitionists, one, in particular, being about a goth couple simply referred to by the show as “The Weirdos”. In one episode, The Weirdos discover, after getting a black light lamp, that their handmade brooms constructed of twigs and straw are only intended to be aesthetic decor. As a result, they are forced to go shopping at Bed Bath and Beyond, immediately facing issues when they tell a shop attendant that they need pans that are suitable for the cooking of blood and fish bones, further compounding the issue by inquiring about a vacuum cleaner that is equipped to deal with the shedding of their dead and disintegrating pets. They eventually come to terms with the store’s lack of upside-down-cross-shaped vacuum cleaners and buy a red riding vacuum cleaner perfect for vacuuming up bat ashes.

In opposition to the hipsters that the show loves to mimic, many sketches exaggerate those who are overly invested in political causes. In one sketch where Armisen and Brownstein play grocery store clerks, a man forgets his reusable grocery bags. When he tells the clerks this, they compare it to forgetting to open your eyes when you wake up in the morning and miming driving because you forgot to get in your car.

Over the years, the show has garnered its fair share of attention. Much of its public feedback, both negative and positive, is very extreme. The aforementioned feminist bookstore segments were filmed in a real independent bookstore that was renamed “Women and Women First” for the purpose of the show. Since the first part aired in 2011, criticisms have arisen calling the segment transphobic and misogynistic due to Armisen co-starring in the segment while dressed up as a woman, mocking masculine—and by extension in the eyes of some critics, transgender—women.

Despite this, “Portlandia” has not gone without its fair share of awards and accolades, winning multiple Emmys, Art Directors Guild Awards and a Peabody. Satire is a controversial and hard-to-do type of comedy, but general reception seems to suggest that, at least for the time period the show’s material was written for, Armisen and Brownstein utilized just the right stereotypes in just the right amounts to get people laughing and engaged.

Whether you love the show or hate it, the cultural impact it has made on the city it is so lovingly (at times) satirizes is remarkable. Former Mayor Sam Adams declared January 21st, the anniversary of the first airing of an episode of the show, “Portlandia” day. Its parody of hipster culture in the show has inspired tote bags and t-shirts aplenty, and if you’re ever in town, you can take a “Portlandia”-themed tour of the city led by Everybody’s Bike Rentals and Tours. So, mark your calendars for January 21, 2023, the twelfth annual “Portlandia” day.