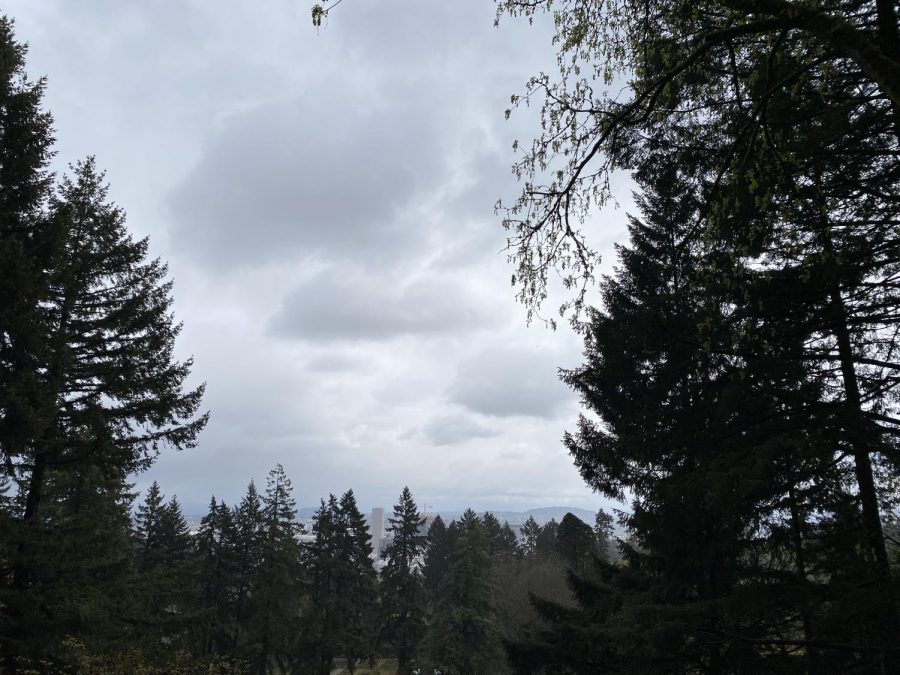 Portland’s skyline is obscured by a dense layer of trees.

On a cold Sunday morning, Cody stands in the middle of a large underpass looking out over the Willamette River. He works for a non-profit called Community Meals with Home PDX Church, and every week they meet at this spot, but it hasn’t always been that way. Since Community Meals was founded 15 years ago, they’ve had various locations. Previously, they operated across the river from where they are now, but a permit requirement on setting up tables incentivized them to move. Now, they set up the boxes of food on a concrete bench.

Although their locations changed, one thing has always remained: the community. Cody says even though they lost some members when they crossed the bridge, every day on this side of the river, their group grows. He says “[We’re] breaking bread with the community, [it’s] a community meal.”

One thing Cody’s held on to from his experience hitchhiking across the country is how it feels to be served a meal. He recounts a story of another organization that serves meals to the houseless. They click in the people they serve, and although they allow people to cycle through the line as many times as they want, Cody says their serving sizes are abysmal. It is commonly said that at that location, “you need to go through four or five times to get full.” He says Community Meals doesn’t use clickers to count the community they serve, “on the receiving end, it feels very inhuman to be clicked in.” Cody says it doesn’t make sense to treat people that way, and that there’s a real importance in treating people like “people instead of numbers.”

It feels genuine that people in your community are helping you serve, and you can jump in at any time.”

Again and again, community comes up with Cody. He says Community Meals doesn’t employ a lot of people: volunteers help cook, set up and serve. Cody says many of these volunteers are houseless themselves, “It feels genuine that people in your community are helping you serve, and you can jump in at any time.” He continues, “We are for the people by the people.” When they don’t know what to make, they ask, and when they need help, people aren’t afraid to step up. For Cody, there’s no doubt that “community” belongs in Community Meals’ name. And he loves to learn about that community, “it’s interesting all the people we get and the stories that bring them to our doors.”

Recently, their efforts have stepped up. Cody says he hates to get rid of leftovers, so he started biking out to areas inaccessible by car and handing out meals. Bit by bit, this operation grew. Now, every Thursday, 3-4 bikers ride out with attached trailers full of sandwiches. And, while this tradition is new, others have been around for a while. On Wednesdays, Community Meals runs a mobile pantry, and for the past nine years, they’ve been serving burritos in the park every Tuesday.

Although Community Meals was impacted by the pandemic, Cody seems more focused on the here and now. The day Inkwell visited, they made biscuits and gravy, with berry crisp and vanilla ice cream for dessert. As Cody explains, “it’s cold out,” and hearty food warms the soul. A phrase that’s frequently heard defines Community Meals: “bending plates,” the idea of serving someone more than enough, connecting through food.

One last thing that Cody stresses is the small divide between those with and those without. “Everyone is living in a house of cards, anything can flick it [causing it to collapse].”