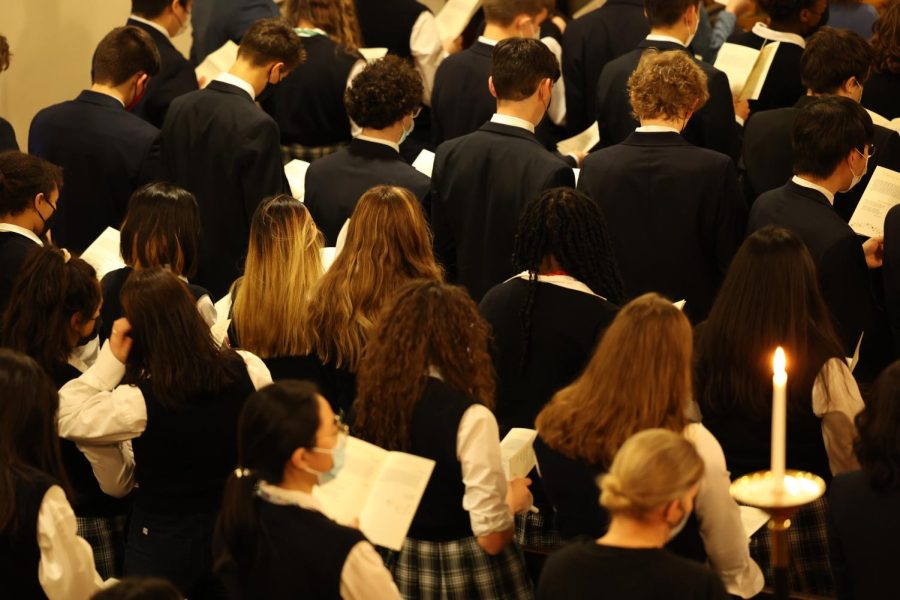 This article was originally published on Inkwell’s website and has since been updated with additional information.

The Annie Wright Schools administration has made a major decision regarding uniform policy. Inkwell uncovered several yet-to-be-announced uniform edits that significantly alter both Upper School divisions’ uniforms. These changes come after a joint student government (Student Life and Governance [SL&G] of the USG, Legislative Assembly of the Boys School [LABS] of the USB) push for more uniform options for both divisions.

“
Student feed-back [is] a key factor in the decision-making.”

Eireann Corrigan, director of the Upper School for Girls, summed up the process of making changes to the uniform: “Rob Scotlan met with both SL&G and LABS to gather ideas and feedback from the student body. Then, Mr. Stubbs and I met with the other division directors and the Senior Leadership Team to finalize details.” She says both her and Jeremy Stubbs, director of the Upper School for Boys, are excited about the uniform changes. As Corrigan added, “uniform[s] evolve just like schools do. We want future students in the USG and USB to feel comfortable and included.” Ultimately, she points to student feedback as a key factor in the decision making process and hopes students continue to share their ideas. Corrigan explained the new uniform decided upon by the Annie Wright administration: “Students in both the USB and USG are now able to wear components like khaki or navy trousers, blazers, ties or ribbons, white button-down shirts or polos, as well as the plaid skirt that remains a part of school tradition.” Jeremy Stubbs, director of the Upper School for Boys, clarifies, “If students are wearing a polo they need to wear the ribbon tie. If students wear a button-down they can wear the striped tie or the ribbon tie.” Corrigan emphasized that the new uniform will be more gender-neutral and span both divisions.

“
The new uniform will be more gender-neutral.”

A potential change to the uniform concerns dress uniform days. Addressing whether or not there will be dress uniform next school year, Head of Schools Jake Guadnola said, “I’m not sure. We are actively considering uniform alterations that we think are perhaps in the best spirit and keeping of our intentions with the uniform.” Guadnola pointed to price as a main factor in these conversations. “[We are] also trying to recognize the inherent cost of purchasing items that are so infrequently worn.”

He said it doesn’t make sense to require families to spend hundreds of dollars on uniforms. “In the lower school it’s even worse where you know a kid will go through sizes in a year, and each one coincides with a different dress uniform moment.” Ultimately, Guadnola said the administration isn’t set on anything: “if we [keep] it, why? If we get rid of it, what would replace it?”

Stubbs mentioned one alternative option that had been discussed. The Upper Schools would implement a system of “Uniform+” days, where students would be asked to wear a button down shirt with tie instead of the more casual daily uniform. It is important to note that although students from both divisions will be allowed to wear blazers next school year, under this system, they would not be required at any point to do so.

Though the administration is opting  for drastic uniform changes in the form of a ‘mix-and-match’ system, the joint student government proposal suggested a very different way of enforcing uniform. According to the current head of LABS, Sean Lee (USB ‘22), the proposal sent to the administration allowed for students from both divisions to wear the uniform of the other division. However, he stressed that under the proposed system, “you can’t really wear ‘mix and match’ [uniforms].”

In order to arrive at this proposal, Head of SL&G Christine Hu (USG ‘22) noted there were many discussions surrounding potential uniform systems. She says they proposed three options: a single uniform for both divisions, a ‘mix and match’ option and a system with separate uniforms where a student could choose between the two.

Ultimately, the AWS administration chose not to go with the proposal sent from the two student governments, instead deciding on a system that allows for greater flexibility in uniform choices. The original conversations around this issue have been going on for a long time, however, the movement towards more inclusive policies gained traction in early 2021 after SL&G campaigned for gender-neutral pronouns in student handbooks. Around that same time, Inkwell published two opinion articles on the topic of single gender education and inclusivity in uniforms. These coinciding events offered a platform on which student opinion could prosper, and as Corrigan points out in her interview, this was one key factor in deciding on uniform regulation changes.

This breaking news comes after a recent history of poor uniform adherence by students. Since the beginning of the 2021-22 school year, students have failed to show proper uniform, at times dressing in casual clothing without using a “Civvies Pass”—a redeemable ticket that allows students to wear whatever they want on any one given day.

“
In this semester i have witnessed more uniform infractions probably than any other time.”

Donald Sidman, USG science teacher, had a few strong opinions on uniform adherence throughout the school year. “In the transition back to in-person schooling, it is understandable that one of the things that has somewhat been lost is attention being paid to proper uniform.” Sidman says, “In this semester I have witnessed more uniform infractions, probably, than at any other time.” However, he argues that in-person schooling has proved more important than “the detriment of the uniforms being incorrect.” Ultimately, Sidman hopes, “that as the school year progresses, students will be paying more attention to uniform infractions, specifically such things as: remembering to wear their ties each day, not wrapping themselves in blankets as they walk down the hallway and not wearing boots to school.”