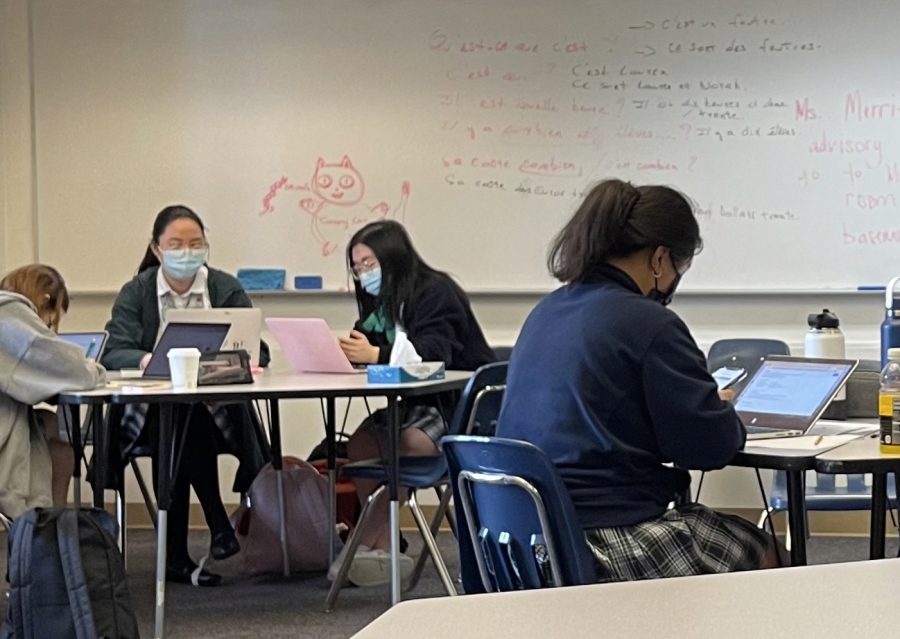 Students wear variations of uniform for practical and expressive purposes.

Uniforms: the Good, the Bad and the Ugly

In light of the current uncertainty surrounding the future of uniforms at Annie Wright, Inkwell interviewed AWS students on their experiences with school uniforms. Student responses ranged from glowing to abysmal, with diverse reasons for positive and negative feelings towards the topic alike. At face value, uniforms provide a myriad of benefits, from early morning convenience to the promotion of school pride — but how do the students who wear them on a daily basis really feel about them?

Inkwell surveyed students on 14 common criticisms and praises of school uniforms, asking them to share their own experiences. The results were extremely divided. 41 of the 56 students surveyed said that they believe uniforms are restrictive to a fault, while 34 believe that they are convenient and 32 credit them to preventing some forms of bullying. These 56 students were also given the opportunity to share their personal thoughts on the matter with Inkwell. Anna Parrott (USG ‘22) praised uniforms for their practicality, saying, “It is definitely nice being able to wake up in the morning and not worry about what I am wearing to school. In this sense, they save time and take away that extra decision-making in the morning.” Many students support uniforms for similar reasons, including Sophia Irigoyen (USG ‘24), who said wearing a uniform helps her stay “organized and punctual.” However, she also expressed that being allowed to wear clothes of her own choice would help her to stay focused during the school day more than the uniform does.

Despite the seemingly common opinion that the uniform stunts individuality by removing an aspect of personal expression from the AWS community, many students feel that the uniform isn’t overly restrictive given the short period of time per day they are expected to wear them. When asked whether uniforms allow for personal expression, Nadine Gibson (USG ‘23) said, “No, they do not allow for personal expression, however, we have after school, weekends, summers and civvies days to express ourselves with our clothing. The 6-8 hours we wear a uniform during school days isn’t detrimental to our ability to express ourselves.” When asked if she believes personal expression is essential to an educational environment, Gibson said, “Of course, however, clothing is not the only way for this to happen.” Most students seem to agree that the uniform mostly disallows for personal expression, however, not everybody believes it should. People get creative though — Henri Bothel (USB ‘23) says he chooses to express himself through his shoe choice. Students are also guaranteed a few days of choice every month. Every Friday, contingent on student behavior, Spirit Friday is celebrated. On Spirit Friday, students are allowed to wear school spirit gear, ties other than the standard red, yellow, green and blue ties and their choice of any pattern or color of shoes or socks. Monthly civvies days occur school-wide every last Friday of the month, and civvies passes are often handed out as rewards.

In this discussion, the school’s outward perception must also be taken into consideration. Many students stated that they believe part of the reason for the preservation of the uniform is to maintain a particular image. Emma McCarthy (USG ‘23) told Inkwell, “I think it makes the school look more prestigious and old-fashioned — that’s what [AWS is] going for.” Another student,  AJ Cotto-Rivera (USB ‘24), said that it stood out to her during her tour of the school: “it gave an extremely elite impression.” While this response was common, many students also stated that they believe uniforms make students, as well as the school as a whole, seem uppity and arrogant. Logan Hancock (USB ‘22) said he believes uniforms create a false sense of elitism, and Calvary Seui (USB ‘24) says he thinks other schools believe AWS to be “uptight and strict” because of them.

For optimal health and education, students should feel comfortable at school, both physically and emotionally. The question is whether or not uniforms infringe on students’ ability to focus and feel their best. Bothel told Inkwell, “Sometimes I can get too hot or too cold. In the past, I was very self-conscious and the uniform didn’t help make me feel more comfortable at school.” Many members of the USG commented that uniform pants are difficult to find or uncomfortable to wear, leaving minimal options during colder months, especially with current COVID-19 restrictions requiring windows and doors to stay open in classrooms. Gibson said, ​​“I generally feel comfortable in uniform, the only edit I’d make to this is that I prefer loose-fitting clothes as opposed to tight-fitting, so I do have to modify the uniform a bit when it’s cold out, usually by wearing loose leggings under my skirt.” Uniform shorts are allowed in the USB uniform but not the USG uniform. Winnie Jiang (USG ‘25) asked, “Why aren’t girls allowed to wear shorts? I prefer to wear skirts, but when it’s hot, it’s the only option for girls, which doesn’t seem at all fair.” AWS administrators and student leaders are currently working to address students’ concerns of gender inclusivity in AWS upper school uniforms (C: Uniforms, page 14).

The list of benefits and downfalls of school uniforms is a long one, complicated further by AWS’ long history of a uniformed student body. The goal of all educational institutions should be the health and education of their students, whether that means maintaining the tradition of uniforms or questioning their role in the Annie Wright community.