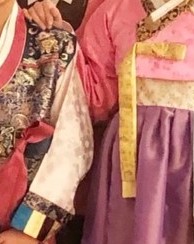 Hanboks, traditional Korean dress, are worn to celebrate New Years and other events.

Cultural Appropriation: Where is the Line?

On the surface, fashion and style seem like the perfect avenues for individuals to express themselves, make a statement or put out art into the world. The world of fashion appears fun, full of bright colors and designs. This might be why people often forget the responsibilities that come with the clothes they choose to wear.

Like any other action, fashion choices carry the possibility to harm others. Cultural appropriation in fashion happens when a fashion choice, in one way or another, harms the group from which the fashion is inspired or taken from. A fashion choice becomes culturally appropriative in the following situations:

The wearer is praised for wearing the piece, while members of the culture it originates from are discriminated against for it.

A prominent example of this is dreadlocks and box braids. When worn by black individuals, these styles are often labeled as “low-class” and unattractive, causing further marginalization of the group. The issue in white or otherwise non-black individuals wearing these styles lies in the claim that somehow, the style is cool and attractive on them, but not on members of the black community. A similar issue arises in any situation in which the wearer claims to have originated or reinvented the piece or style, completely taking any credit from the culture it originates from. One example of this is the cat-eye makeup trend, which came to popularity on social media and fashion in recent years. This trend becomes harmful when taken to certain extremes: eyeliner designed to change the shape of one’s eye to make one appear more “Asian,” or taping back the skin next to the eyes to pull the corners of the eyes taut. Many people have called out this makeup style, citing how having smaller or more cut eyes has been a point of ridicule for many people of Asian descent.

The wearer does not understand the cultural significance of the piece.

Oftentimes, people can take ceremonial dress out of context. One prevalent example of this is Native American headdresses worn decoratively, when historically these pieces carry deep and specific cultural significance. Appropriated headdresses often feature feathers and beaded headbands, blending all Native American cultures into one piece, neglecting the fact that different tribes had distinct headdress designs. Furthermore, by wearing a headdress casually and on a whim, the wearer is disrespecting the symbolism the headdress carries. Traditionally, headdresses were worn by the most powerful and accomplished individuals in a tribe. Furthermore, a lot of cultural importance goes into the making of any one headdress as a piece of art that is disregarded when the piece is mass-produced for commercial purposes. One recent example of cultural appropriation that falls under this category of wrongdoing was a Gucci runway show in 2019, which showcased non-Sikh observing models sporting blue Sikh turbans. Gucci faced harsh backlash for taking this sacred article of clothing and promoting it as a simple accessory.

The way in which the piece is worn/stylized sexualizes the culture or the members of the culture.

One example of a highly sexualized piece of clothing is the qipao (and, due to the blending of Asian cultures together, the áo dài and hanbok as well). The qipao has origins in both tea ceremony and as an expression of femininity in Chinese history. However, often times, qipaos are sexualized by foreign wearer with high slits, a form-fitting shape and a cutout at the sternum to expose a part of the wearer’s chest. This popularized iteration of the qipao in fashion is especially problematic, as it feeds into the view of Eastern Asian women as sexual objects —as brides of war, as Hollywood seductresses, as exotic beauties of a submissive nature. Similarly, Native American dress is also often highly sexualized. From music festival attire to Halloween costume, Native American dress is often sexualized through short and low-cut clothing decorated with stereotypically Native American elements such as beads, feathers, jewelry and body paint. Native American women are 2.5 times more likely to be sexually assaulted than white women, and this cultural appropriation furthers this oppression. For example, Lizzo, the pop star, was criticized after the release of her Rolling Stones magazine cover shoot, in which she sported traditional body jewelry tied to South Asian culture whilst exposing a lot of skin and posing sensually. She was criticized for appropriating South Asian culture and further sexualizing traditional pieces like body jewelry.

By purchasing or wearing the piece, the wearer is supporting a person/industry/company that harms the culture/members of the culture the piece originates from.

This is true for any fashion item: supporting someone who actively causes harm to something or someone else should be avoided, if fiscally possible. If one’s intent is to uplift and appreciate a culture, then buying a mass-produced product manufactured by a large company has the exact opposite effect. Instead, one should try and buy from smaller artisans, particularly artisans who belong to the culture the piece one wants to purchase originates from. Not only does this promote authenticity, but also ensures that buying and wearing the piece is an exchange between cultures and not an exchange with a large company that does not pay due to tradition and origin.

Of course, this list is not rigid nor exhaustive. Generally, however, if someone is wearing a piece or a style in an attempt to imitate their idea of a culture, or as any sort of costume, it is culturally appropriative and it is wrong. It is important that people understand that the style or dress they don for an aesthetic is part of the constant reality of a person of that culture. Taking one of the examples above, while someone who chooses to dress in a seductively-stylized qipao, the millions of Asian American women around the world don’t have the choice to similarly shed the hypersexuality projected onto them because of their ethnicity.

However, this isn’t to say one can never wear something that has originated in or was popularized by another culture. Cultural sharing is actually quite important in an ever-intergrating society, as long as it is done with respect, tact, and true appreciation. For example, it is completely appropriate for someone to wear a piece gifted to them, or at event in which wearing the piece is custom. Culture is meant to be celebrated, and fashion can and should be used as an outlet for this celebration.