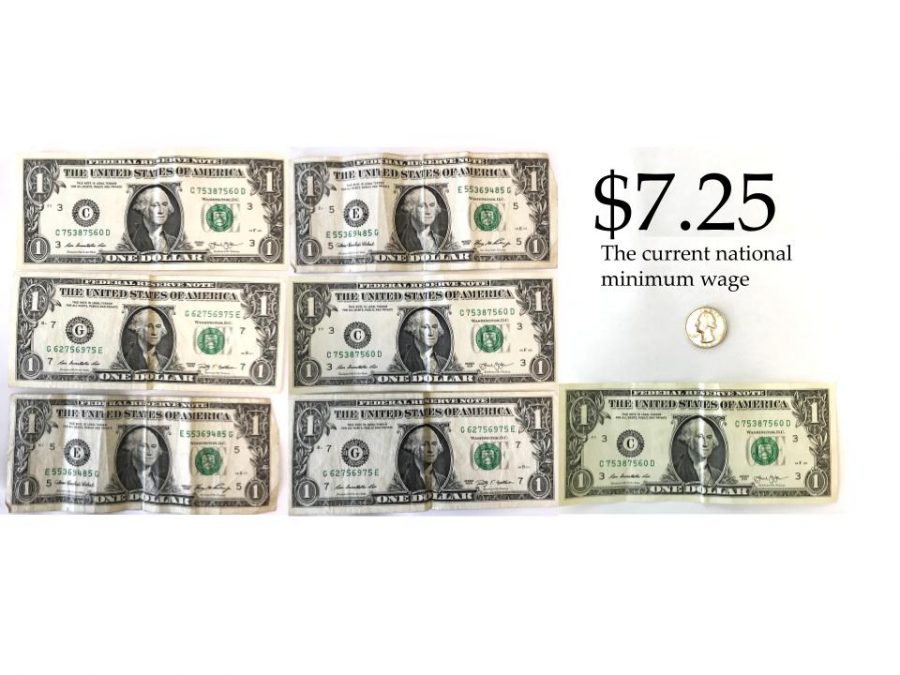 Impact of a Minimum Wage Hike

Under the leadership of a new Democratic administration, progressives in the US senate are building momentum for a federal minimum wage increase to $15 per hour.

The last such increase occurred in 2009, raising the federal minimum wage to $7.25. “Because of inflation though, the prices of everyday things have increased since the last time minimum wage was changed,” said Simren Khan (USG ‘22). “I think that the minimum wage should account for that.” Accounting for inflation, Americans earned a higher minimum wage in 1961 than today.

Patrick Graham, who teaches economics at Annie Wright Schools, explained the reasons for and against such an increase. “The debate about raising the minimum wage is that small businesses will have to pay more to workers, and then have less leeway for other expenses,” he said. In some cases, paying more to employees may move employees to a higher income bracket, requiring businesses to provide them medical care.

Graham summarized the bottom line effect on businesses: “Your profit margin just slips down significantly.” To make up for this loss in profits, businesses may increase the cost of goods. If this occurs, then despite the increase in income, workers may not be able to purchase as much with it.

The most significant impact would be on jobs. “I worry about what an increase would do for job growth and creation. Businesses will have to get more strict with hiring and think, ‘Is this guy worth paying $15 an hour for?’”

At some McDonald’s restaurants in California, workers at the register have already been replaced with computer screens. These screens take an order and payment just like a human cashier. “There’s fear that if you make having workers more expensive, those jobs will become automated,” said Graham.

This, of course, is an extreme example. But the principle behind it remains true: businesses will look for ways to cut costs— and often employees— to increase their profit margin.

This, of course, is an extreme example. But the principle behind it remains true: businesses will look for ways to cut costs— and often employees— to increase their profit margin.

“The idea behind raising the minimum wage is to give the individual American more purchasing power with what they are making,” Graham said. “But you won’t have that purchasing power if you lose your job.”

The principal argument for a minimum wage increase is humanitarian: that in doing so the government would help the needy. “But what happens if those people don’t have jobs?” asked Graham, “How does that help a community?”

When a business is paring down its workforce, young and inexperienced workers, such as teenagers, are often the first to go. This limits employment opportunities for teenagers working minimum wage jobs not simply for the money, but to gain an introduction to work experience.

Maya Garcia (USG ‘21) earned minimum wage as a pool lifeguard. “I was 15, and saving money wasn’t a priority. I was more just looking for the experience.” For Maya, the most valuable reward was not financial—“things like having a manager and being able to communicate at work. For me, it was the experience that mattered.”

Among other factors, increases in state and local minimum wage have seen teenage engagement in the national labor force decline by 17% since 2000. Today, fewer than one in three teenagers gain any work experience before turning 18. A national minimum wage increase could reduce employment even more.

On the other hand, if wages are raised, then workers may spend more money. It is possible that this, in turn, could increase businesses’ revenue and spur job creation, mitigating the loss of jobs.

For many, a minimum wage increase is the maintenance of an acceptable standard of living. “If you’re a single mother, I think you should be able to buy your kid a winter coat if they need one,” said Simren Khan, Upper School for Girls junior. “$7.25 is really not enough anywhere. I don’t think anyone can create a life for themselves or flourish making only $7.25 an hour.”

Graham explained one difficulty of raising wages that would affect above-minimum wage earners. “What about the workers who are already earning $17 per hour? Currently, they are earning twice the minimum wage, but if it’s raised to $15 an hour, that will be only $2 more than minimum. Will their salaries be increased to stay at twice the minimum? On the other hand, if all salaries are increased, minimum wage earners will still be at the low-ball end of the spectrum, so what’s the point?” Were a universal increase to not occur, then this could diminish the incentive to pursue education and career development.

To raise citizens’ purchasing power, a single nationwide minimum may not be the answer. “The cost of living in the greater Seattle area is way more than what you’d need in, say, Oklahoma City. The pricing of housing and general goods vary. In New York City, even $15 may not be enough to get by on.” San Francisco has one of the highest costs of living in the nation, but Graham attests one can live much more cheaply just a two hour drive away.

An increase in minimum wage means there is more taxable income available to the government. This can be used for infrastructure investments that may improve citizens’ quality of life.

All individuals Inkwell spoke with supported an increase in the national minimum wage. However, Graham shared concern regarding the manner in which this is achieved. “A drastic increase to $15 all at once may cause an economic shock that creates bigger issues. I think we should stagger the increase over a few years and gradually bring it up to $15. That way we can see how the economy responds before making that big change.”