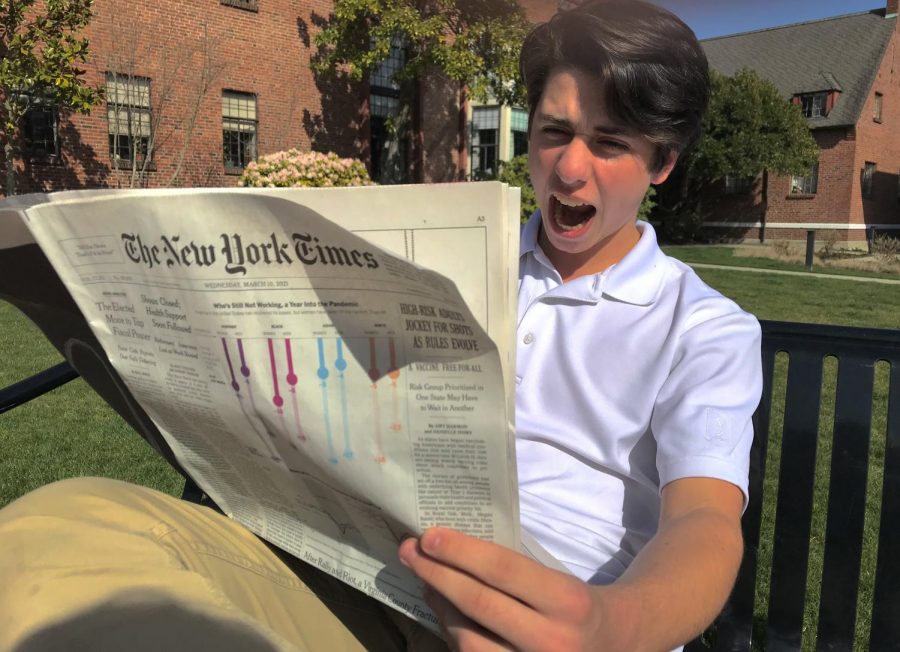 Does your news make you mad? If it appeals to your emotions, it may be a source of bias.

Everyone has their comfort zone. When it comes to media preferences, this is particularly evident.

It’s up for debate who’s news is the ‘mainstream’, but there’s no doubt that between media outlets one can detect a spectrum of ideologies.

The cause of this lies at the root of journalism. As professional and objective as reporters pride themselves to be, their basic trade is storytelling. And there are always as many takes on a story as there are people to tell it. In presenting their perspective of a story, it’s inevitable that journalists’ beliefs and biases are also conveyed.

Upper School for Girls English teacher Laura Barber leads a specially-developed unit on bias in media, and is expert in the art of identifying bias.

“The first thing I look out for is emotionally-loaded language,” Barber said. “News with bias tends to be effective because it has lots of emotion behind it. If you notice you’re having a strong emotional response to the language, that’s a sign that it’s probably biased.”

“Emotions are what make it appealing. It’s more entertaining. Even if what you’re feeling is outrage, it still has a certain appeal,” she said. Media that exaggerates or misconstrues facts for dramatic effect can produce an even stronger emotional reaction.

People are drawn to what excites them, and this often means a specific ideology. “Even if people aren’t strongly aware of what a source’s bias may be,” said Barber, “they realize that some sources are more appealing to them and gravitate towards the ones that share their biases.”

Currently, the two most popular news shows on cable are “Hannity” and “Tucker Carlson Tonight,” both airing on Fox News. Fox, the most-viewed network in America, has shows that are both reliable and unreliable, neutral and patently conservative. But the two most biased shows on the network? “Hannity” and “Tucker Carlson Tonight.”

“I feel like that’s very telling,” said Barber. She theorizes that conservatives are willing to accept higher unreliability from Fox News because it is the only source from which conservative media is available. “There truly are so many more outlets that are liberal than conservative,” she said.

Media consumers who are too cozy in their comfort zone can get stuck in a vicious cycle, Barber warns.

Social media can be an especially perilous source of biased information. Posts that have a strong emotional appeal may lead users to like or share on an impulse.

Barber encourages her students to make the distinction between bias and reliability. Reliability depends on whether the facts are accurate—statistics, names and dates. Bias is usually political, either liberal or conservative, and leans in one direction or the other.

Bias in media is not exclusively liberal or conservative. Barber, much of whose class is Chinese, examines in her unit anti-Chinese bias in mainstream US media. She then compares it to the attitudes planted in China Daily, an English-language publication dispensed by the Chinese government, which is similarly biased against the US.

When especially subtle, bias tends not to affect the reliability of a news story. This effect is different from that of the entirely unreliable, fake news which has proliferated over the previous five to six years. However, any degree of bias in media can reinforce the biases of a consumer.

Barber traces this effect to the present political polarization in America. “If you take in news that’s always slanted in your direction, often unfairly, against the other side, you’ll begin to dismiss the other side as unreasonable or evil, when they are actually more reasonable if you look at things from their perspective, because there may be information that is left out or emphasized that would really change your thinking.”

According to a survey taken in the Annie Wright Upper Schools, the most popular media outlet among Annie Wright students is the New York Times, rated center-left by Ad Fontes Media, an organization that tracks media bias. Students sharing the most confidence in the ‘mainstream media’ tended also to prefer more neutral publications, such as the Wall Street Journal. Students preferring Fox News had the least trust in media, reporting 26% below the mean.