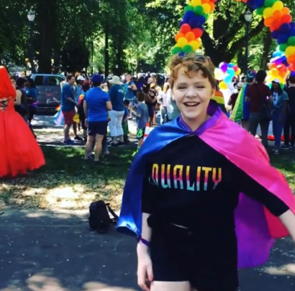 Emily Muehlenkamp attended Portland Pride on a float with her family in 2019.

The History and Celebration of Pride

LGBTQIA+ Pride, celebrated in the U.S. during the month of June, is an expression of equality, commemoration and the increased visibility of the LGBTQIA+ community. The celebrations typically take place in the form of a festival, parade, march or protest.

Pride originated from the Stonewall Riots and today memorializes the Stonewall age as a turning point in LGBTQIA+ history. Stonewall is named after the Stonewall Inn, a gay bar, which opened in New York City in 1966. It was one of few locations for free expression of homosexuality in the nation at the time. Because of this, police raids happened on occasion due to discriminiation and homophobia in the U.S. Bars would typically be given tip-offs by police and raids typically would not last long. Some bars would even resume serving afterwards.

On the morning of June 28, 1969, however, a raid by four police officers escalated when the officers took too long with arrests and people from the bar blocked the police cars and fought back against the officers. The clash took three hours to de-escalate, but it forever left a legacy of resilience and stamina for the LGBTQIA+ community, leading to the first Pride event in the form of a march in 1970 from Greenwich Village to Central Park.

Today, Pride events take place in cities across the U.S. every June and in different months internationally. The NYC Pride event brought over four million people together in 2019.

Tacoma Pride is a festival downtown near Firefighter’s Park with an array of stands and tents run by organizations such as Planned Parenthood, Students Demand Action and the Rainbow Center.

Logan Hancock (USB ‘22) attended the festival for the first time in June 2019.

“It was a bit of a step for me because it was the first time I had done something like that,” said Hancock. “Getting dressed beforehand, I was like, ‘this was something I’ve never worn before and this is very different for me to go to something like this’. I had just been coming out right before that myself, so coming into that space made me realize how many people are in this big group. ”

Emily Muehlenkamp (USG ‘21) attended Portland Pride in 2019. The Portland, Oregon event is a parade with floats and an almost four-hour long route ending at the Columbia River.

“During sophomore year, towards the latter part of the year, I had come out as bisexual and I was open to my parents about it, I was open to everyone about it, but I hadn’t actually really realized that about myself until sophomore year. It was a fun, new, exciting thing. Because I have two moms and it’s such a big event in Portland, even allies and people who just want to learn more about the LGBTQIA+ community, they just go to it and it’s such a big event. We actually went with Portland community college because they both worked there at the time. I was able to see it from not an external point of view but an internal point of view because we had a parade float and we were in the parade,” said Muehlenkamp.

While Pride is a joyful expression of the visibility of the LGBTQIA+ community, there is still demonstration and vocalization from people who do not see sexuality as fluid or do not believe that homosexuality, same-sex relationships and transgender transtioning should be allowed in the U.S.

Muehlenkamp spoke of her experience seeing an anti-LGBTQIA+ group stationed on a corner of the parade route.

“It was funny how much louder and how much more joyful everyone was right on the corner. Like ‘we’re just having fun’ and ‘we’re just being who we want to be’. It was them being aggressive from that side but then everyone who partaking in the event was really loud and happy and dancing extra right there,” said Muehlenkamp.

Similar to Muehlenkamp, Tacoma Pride also allowed Hancock to find the unity in this community that was newer to him.

“It made me realize that this is one community, but not in the way that other communities are one community, this is multiple groups that have been forced together in order to get something done and in order to progress forward. What I really noticed was everyone [at Pride] was from different parts of the LGBT community and they’re all very different in their own culture and themselves, so what united people there was kinda what they weren’t rather than what they were,” said Hancock.