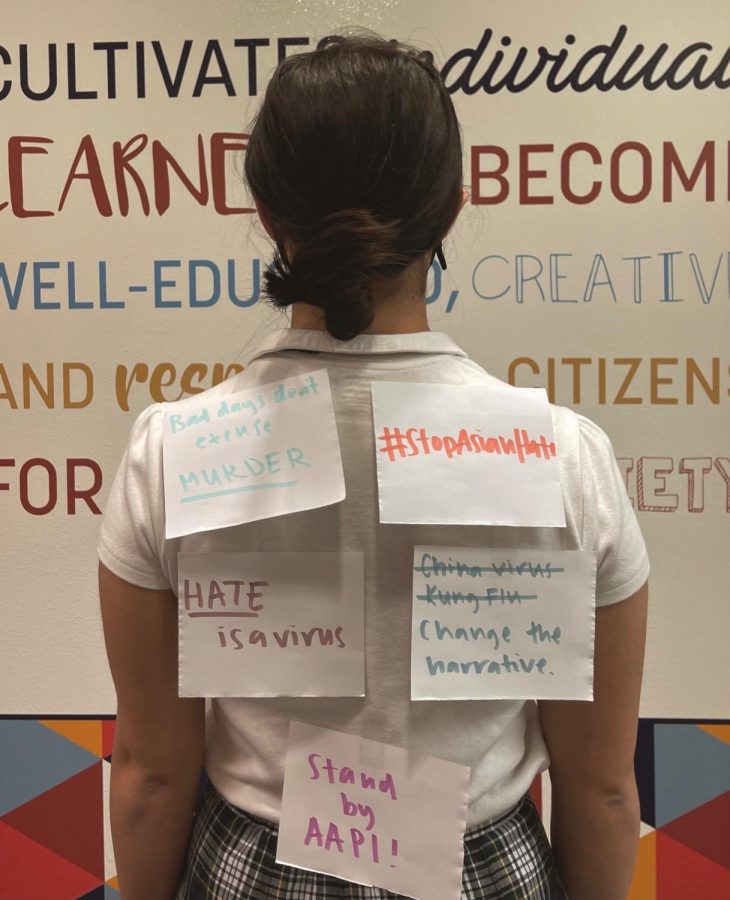 The AAPI community and its allies share powerful messages and tags across social media and during protests and speaking events.

Since the emergence of the COVID-19 virus in the Wuhan Province in the People’s Republic of China, there has been a significant increase in discrimination against the AAPI community in the United States. Harmful narratives pushed by government figures who call COVID-19 names like the “China virus” or the “Kung flu” have fueled the sentiment that the COVID-19 pandemic is to be blamed on individuals of AAPI descent.

In the early days of the pandemic, numerous outlets reported a rise in AAPI hate crimes across the country. Of late, there has been another surge of violence against this community. Stop AAPI Hate, an organization dedicated to fighting AAPI discrimination, reports almost 3,800 instances of bigotry against this community from March 2020 to February 2021. There has been a 149% increase in cases since 2019.

One example of a recent crime in Washington State is the vandalism of a church in Seattle. Offenders painted aggressive messages onto the walls of the church, spurring rallies against AAPI hate. King County reports the prosecution of 59 AAPI hate crimes since the beginning of 2020.

In a public statement, Washington State Governor Jay Inslee stated that Washington is a “welcoming state” and that he has a “zero-tolerance policy for hate and racism.”

Inslee further stated, “Victims deserve support and justice. There are systems in place to ensure offenders face consequences for their unconscionable actions. I encourage victims to come forward and report their experience to local law enforcement.”

“I stand in solidarity with members of the Asian community who continue to experience fear and intimidation. They deserve better, and we must do everything in our power to make their safety and security a priority and to eliminate racism in Washington,” Inslee said.

Media management for Inslee could not be reached for additional information on the matter.

Numerous local institutions dedicated to supporting AAPI and other minority groups have spoken out against the anti-AAPI hate crimes in the past year. Korean Women’s Association (KWA) is a Western Washington organization established in 1972 with the mission to “Provide multi-cultural, multi-lingual human services, regardless of race or ethnic background, to diverse communities through education, socialization, advocacy and support.”

In a recent press release, the KWA offered support and a haven to communities and individuals impacted by the increase in anti-AAPI discrimination: “Extending a culturally-aware, helping hand is at the core of the KWA mission and we will not stand by as expressions of hate are perpetrated against our Asian American Pacific Islander brothers and sisters.”

The KWA further posited, “Did you know that scientists have confirmed that COVID-19 does not respect borders and is not caused by ethnicity, and we caution against using geographic descriptors because they can fuel ethnic discrimination?”

As a multinational and community-minded school, Annie Wright Schools wants to support its student body and actively respond to its needs during this time.

“We consider Monday’s community meeting a start point, we appreciate that students shared resources and concerns, we’re going to keep bringing up this conversation and acting on them,” said Eireann Corrigan, the director of the Upper School for Girls (USG). Additionally, the school has established Diversity, Equity and Inclusion (DEI) groups working towards the Strategic Plan for Diversity. According to the school website:

“The Strategic Plan for Diversity, adopted in early 2019, outlines a vision for supporting all members of the Annie Wright Schools community and for developing robust Diversity, Equity and Inclusion programming. There are four general areas of attention, each with specific initiatives, components, and performance measures.”

These DEI groups are working to find ways to educate and inform the community about various diversity-related topics. Corrigan gave one pertinent example: “There’s a DEI section in the Friday Flash [a division-wide newsletter] and they are working on a paragraph to explain microaggressions and give people some insights on how to intercede[d] and help if they witness [this]. That advice is geared towards parents as well.”

Additionally, Corrigan reported, “We have a DEI working group on campus made of faculty and staff across all divisions. they have met with the Affinity Group team yesterday to put into place and launch Affinity Groups in both the middle school and high school.”

Affinity groups are cross-division organizations that provide a community space for groups of people with similar cultural backgrounds to come together.

“We also recently established an Affinity Group for students who identify as Asian or Asian American and we hope that these will provide a safe space,” said Corrigan.

Annie Wright Schools  hopes to establish Affinity Groups for student parents as well, and “recognize that constituents across the board are concerned about [the rise in anti-AAPI hate] and we want to ensure feelings of safety and belonging.”

Annie Wright Schools has been in a unique situation since the beginning of the pandemic because of its predominantly Asian boarding community. One boarding student, Amber Fang (USG ‘23), describes her experience:

“After the pandemic started, I have been online on my social media account, from which it’s obvious that I am Asian. And people were kind of attacking me in the comments section. They first recognized me as a Chinese person, and then they were talking about how it was my fault that there is [COVID-19] in the United States.”

Fang, like many others, is frustrated with the discrimination she faces on a regular basis. She resents the fact that many ignorant people blame Asian individuals and Asia as a whole for the pandemic. “Of course I fought back … And to begin with, I’m Taiwanese, not Chinese, and we’re also all victims of the fact that the virus is spreading. It’s not just somebody’s fault, [there’s] not just one to blame. It’s our fault, it’s your government’s fault. Of course they can say, “but you [failed to] keep it in your own country,” but once it’s spread it’s more on you, on whether or not your country [can] handle it. Because look at New Zealand, look at Taiwan, you know, they have [returned] to normal lives. But look at the United States, it’s different.”

Fang also expressed how the rise in AAPI discrimination and hate has affected her. As an Asian high school student residing on her own in the United States, Fang lives uneasily.

“I’ve never been this terrified to go to this boarding school in the United States ever before. I just feel like that at this point, I wouldn’t even feel safe if I were to sign out of the dorms alone, by myself, without walking with other people or going in a group with the dorms. I don’t know what’s going to happen to me if I’m outside, alone, by myself. It’s just really scary,” Fang said.