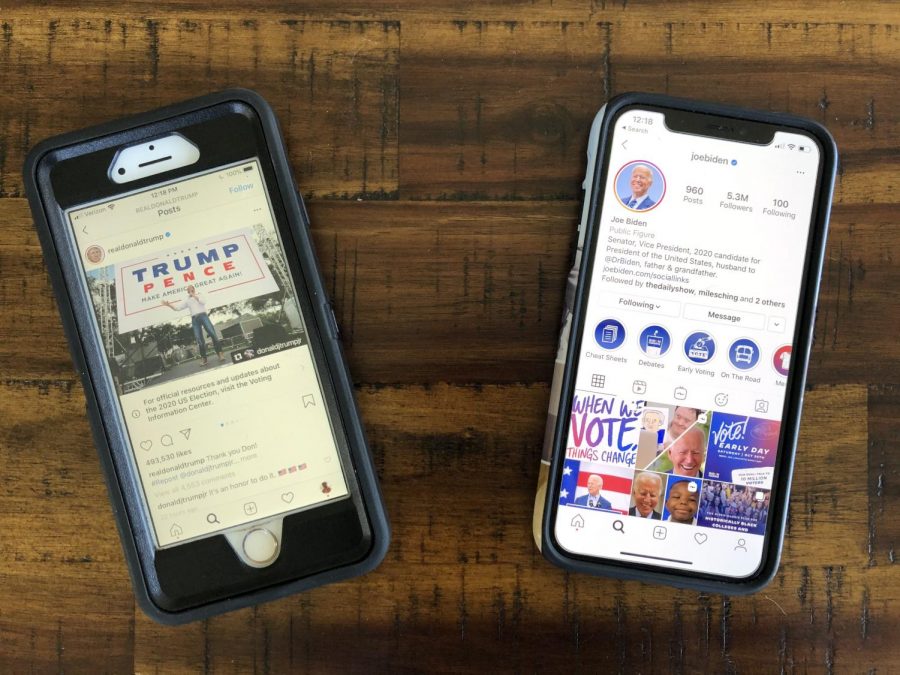 As of 2020, Twitter reports a monthly average of over 300 million active users, and Instagram reports over 1 billion monthly users. With large political rallies all but banned in the COVID-19 era CNN’s highest view count only coming in at 1 million, it is undeniable that social media is the most effective platform to reach a wider and more diverse audience for presidential candidates.

In a survey of 28 Annie Wright students, a majority of 58% of students stated that they believe a strong social media presence is important to the success of a presidential campaign, or really any political activity. Students surveyed selected Donald Trump, Alexandria Ocasio-Cortez and Joe Biden as the politicians with the most significant social media presence across platforms like Twitter, Instagram and even TikTok. Incidentally, the same three politicians were among the most followed across various social media platforms by the students surveyed. Annie Wright Freja Holmes (USG ‘24) wrote that “I believe that who you follow on social media can very much have an [effect] on your political views, especially if you are at the stage in your life where you are developing independent views from your family and friends.”

However, within this group of students, there was a divide between whether or not the information and opinions shared via official social media accounts were helpful, trustworthy, or generally a positive in their influence. Madeline Strate (USG ‘23) stated, “I get to see more of [their] opinions in their own words without worrying about media bias, so I think it gives me a more clear view of [their] stance on issues.” While some students shared the belief that social media can provide a clear and perhaps more relatable look at some politicians, others argued that the information put out on a candidate’s social media, namely current president and 2020 presidential candidate Donald Trump, could be biased in opinion and even information regarding certain issues.

Some students also noted that the influence or impact of politicians’ accounts could be augmented by how ‘personal’ their posts felt. Student activist Erin Picken (USG ‘23) stated, “I feel like with candidates…who have a lot more people working with them on their social media, it’s not as much of a personal thing. With more [involved politicians], like the [U.S. representative] AOC, you can tell a lot more. I wouldn’t say, ‘oh, I know Joe Biden’, because he doesn’t run his Instagram, that’s his team.”

“[It] depends on the content of what they put on social media, but I think [going through social media] helps people take more controversial stances, since they can be anonymous,” said Emil Haedt (USG ‘21). Others similarly noted that the aspect of anonymity can be both a good and bad thing in an era of strong political polarization and tension.

Students also mentioned how the followings of politicians affected their social media presence. Of the students surveyed, a majority stated that Donald Trump and his supporters had the most overpowering social media presence. However, as described by Katherine Maas (USG ‘23), “I think the definition of ‘strongest’ is a bit skewed here. I see Trump the most, but I wouldn’t say his presence is ‘strong’ as in it changes my opinion of him.”

Picken elaborated on this sentiment. “I feel like I hear about [Trump] in a positive light a lot more. But a lot of the time, these things I hear are not policy, just general comments [about Trump as a person]. But, I feel like whenever I hear Joe Biden being talked about, it’s always about whether he likes something or doesn’t, or what his policy is on things. The discussion around him online feels a little more productive.”

While student views on social media and politics varied, it is evident now more than ever that social media will continue to expand and develop its role in modern communication. Picken ventured, “Once politicians begin to understand it a little more, hopefully [social media presence] will become an important part of how people get legitimate information, because at times it can feel like you’re confused about what’s real, what’s fake. Hopefully, that will be sorted out.”