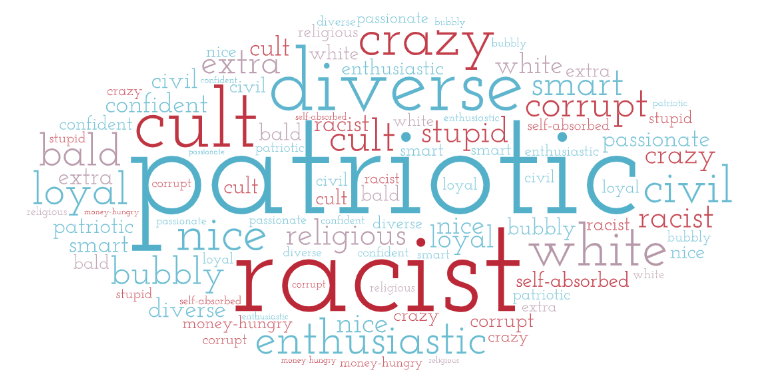 Other countries share their opinions on Trump, Americans, and the United States

While the United States is widely considered to be a strong force in the Western world, there is no doubt that its rapidly changing political climate, civil unrest, and recent handling of the coronavirus has affected its reputation.

Inkwell reached out to students all over the world to get their opinions of the United States, Americans, and President Donald Trump, as well as their general knowledge of US politics and the upcoming election. Here are their responses.

“Generally speaking, ‘American’ over here is synonymous with ‘Trump,’ which is synonymous with a whole bunch of other words that I won’t mention,” said Umar Ingalls (LS ‘16). Ingalls is half American, but currently lives in Dubai. When he tells people of his citizenship, he often has to explain that “no, I’m not a Trump supporter.”

There is no such thing as civil discourse between opposing sides anymore. It’s about who screams the loudest. From an outsider’s perspective, it’s pretty sad.”

Because Ingalls has lived in the United States, he does not believe all Americans are the same. “It’s a complicated country with a variety of characters,” he said.

However, he also mentioned that under Trump, the U.S.’s image has drastically shifted, especially to citizens of the UAE. “[In terms of] his presidential policies, nothing comes to mind in terms of things that are objectively ‘good.’” When asked about the U.S.’s response to the COVID-19 pandemic, Ingalls simply replied, “Terribly.”

“It’s ridiculous,” he said. “There is no such thing as civil discourse between opposing sides anymore. It’s about who screams the loudest. From an outsider’s perspective, it’s pretty sad.”

Noelia Blanco, a student at the Annie Wright Spanish sister school Eurocolegio Casvi, said that, while some Americans are “a little racist and a little crazy,” overall, they are nice. “When I think of the U.S., I think of New York and its beautiful snowy streets,” she said. “I also think of armed people walking around on the streets.” Blanco said that Spain thinks of the United States as the “greatest power in the world” and many Spaniards think the best of Americans.

Blanco said she doesn’t know very much about the politics of the United States apart from hearing news about Donald Trump and Joe Biden. “I believe that Donald Trump has not treated the U.S. badly,” she said, before adding, “however I do not like him as a person.”

Spain and the United States were both notably relaxed in their initial handling of the coronavirus crisis, with both countries racking up thousands of cases daily. However, from mid-March until June, Spain was in full lockdown, unlike the U.S. This made Blanco feel frustrated that Trump considered the virus a “simple flu, when it’s really a serious thing.”

“In my opinion, I think [Trump] is a really good business man but he is a terrible leader who makes decisions on what would suit himself, [without] giving much care for others,” said Yandisa Butler, a student from South Africa.  “I actually agree with a few [conservative viewpoints], but now I identify as mainly liberal because of what Donald Trump stands for. The way he speaks is so condescending… the things he says infuriate me. I’ve seen some poor leaders in my country, but never as blatantly disrespectful and blind as him.”

Butler said she did not think the coronavirus was “handled properly” within the United States and led to many unnecessary deaths. Butler knows a fair amount about American politics, like the difference between the U.S. and South African government, or how the U.S. electoral college works. “I do like to be ‘up to date’ with [international politics] just to know what’s happening, and if it would affect me or my country,” she said.

Butler explained that she would like to attend college in the U.S., but that “America as a whole is also pretty scary and doesn’t feel safe… but it’s definitely safer than South Africa [depending on the area].” According to her, most South Africans “would like to go to America, people also think it’s not all that’s it’s cut out to be neither is it the ‘greatest’ place.”

“A lot of people look down on America because of all the decisions that Trump makes which are then associated with Americans,” said Kate Collie (MS ‘18). Because Collie lived in the United States for most of her life, she asked some friends what they thought of Americans. Their responses included, “patriotic, annoying, stupid, loud,” and “think they’re better than everyone else.”

Collie and her peers do not think Trump is a good leader or person, saying that he does not appear to care about the Americans he should be helping and that “most of his decisions are for his own benefit.”

Collie mentioned that she doesn’t know much about the election, but that she tries to “keep up with the news and have a basic idea of what’s happening and the candidates’ view on topics.” Collie said she cares a lot about U.S. politics because it impacts so many others.

Nico Lucio from Colombia said that in Colombia, many Americans are perceived as arrogant and stubborn people who “think [they] are some kind of role model for society… [and that they] have dream lives.” Lucio said these characteristics particularly apply to Donald Trump, who, he said, is “not a leader but a person who rules.”

When asked about the upcoming presidential election, Lucio said that both Biden and Trump are “trying so hard to win at any costs that their behavior is making fun of U.S. political legitimacy.”

He continued to say that, in general, the sometimes overly-independent spirit of many Americans is creating rifts not only within the US, but in other countries around the world. “In general, U.S. citizens tend to choose mainly from a misguided heart,” said Lucio, “and that is causing [the whole world] very serious trouble.”

University student Alice Nixon agreed with this sentiment, saying most ‘kiwis’ view Americans in a negative light. Nixon attributed this outlook to President Trump and the way his administration has handled various topics of concern throughout his presidency. “[New Zealand gets] a lot of media coverage about racism, shootings, and unaffordable health care in the USA which builds up a negative outlook on the country,” she said.

“I think Trump is unqualified to lead any country, especially one as influential as the United States.””

Following the Christchurch mosque shootings in March 2019, New Zealand almost immediately banned semi-automatic weapons – something the U.S. has failed to regulate, despite countless mass shootings in recent years. Gun control was mentioned by Shipley as well, who said it was one of the issues that makes New Zealanders more hostile towards Americans.

Both Shipley and Nixon shared strong feelings about Donald Trump, both as a leader and person. “I think Trump is unqualified to lead any country, especially one as influential as the United States,” said Nixon. “I completely disagree with the way he treats minorities and foreigners and it is upsetting to see his rulings such as ‘the Muslim ban.’ As a leader, I think he has been successful in benefiting himself and those who share his ideologies, but has damaged the rights of many Americans. As a person, I think he is narcissistic, unprofessional, and deceiving. His comments about women are especially worrying.”

Shipley agreed, noting that when she first heard of his candidacy in 2016 she believed it was a joke. “He is a pedophile and a sexual predator,” she said.

Shipley also commented on the way the U.S. has handled COVID-19, saying that Americans “tend to be more selfish as they have to look out for themselves,” which echoes the thoughts of many other interviewees. Since the start of the pandemic, New Zealand has had well under 2,000 reported cases – compared to the United States’ 7.7 million (and counting). According to Shipley, a lack of funding in education and health sectors make Americans “indoctrinated rather than educated,” especially in terms of the COVID-19 crisis. Shipley believes it is “so ingrained that people have to fend for themselves,” that Americans are too selfish to wear a mask or consider others. Shipley also noted that even democrats in the U.S. are “right-wing by New Zealand standards.”

Nixon agreed, adding,“Coming from a country which almost eradicated the coronavirus by April, the U.S. seems to be handling it badly,” she said. “It was upsetting to see [Americans] ignoring distancing rules and protesting mask-wearing and lockdowns.”

Nixon shared that most New Zealanders have a “general knowledge” about U.S. current affairs, and that they get a lot of media coverage of Trump and U.S. political movements, like Black Lives Matter. “…I try to stay updated with American news because I think it’s important to stay informed about international politics everywhere,” she said. “We have to care because it indirectly affects us,” agreed Shipley.