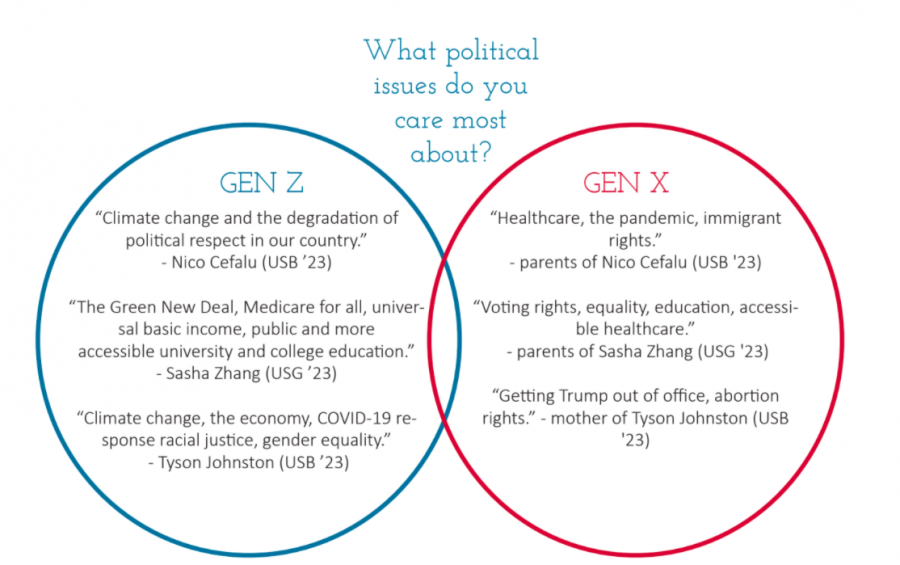 Does a generational gap within families contribute to political misunderstanding?

Do you often talk about politics with your parents and/or grandparents?

“Almost every night we talk about it after the news, though rarely do we disagree.”- Nico Cefalu (USB ’23)

“I talk about politics often with my mom, but not anyone else in my family.” – Sasha Zhang (USG ’23)

“I talk mostly with my mom about politics. I do not know much about my dad. I try not to [talk about politics with] my
grandparents because we would not agree on many things.” – Tyson Johnston (USB ’23)

Do you have to explain certain issues you care about to other family members?

“With most topics we’re on the same page, but when it comes to social justice and racial issues it does tend to be a
little harder for me to explain… my dad, who is Italian, thought that the whole idea of Indigenous People’s day was
irreverent, and stated that Columbus Day is something that many Italian Americans take great pride in. As for them
explaining things to me I generally understand what they are talking about, but my mom does tend to explain the idea
of a coup or collapse of democracy a lot as she witnessed it in Chile when she was a child.” – Nico Cefalu (USB ’23)

“I don’t often have to explain what different topics are to my parents and they are also pretty open minded to my ideas,
but I have to explain why my views might differ. When I learn about new political ideas or policies that I like, I bring
them up to my mom to see what her opinion [is]. She doesn’t always agree with my beliefs, but she does allow for
space to have discussions about them.” – Sasha Zhang (USG ’23)

“I do have to explain many things to family. But that might be more to do with me being more interested in political
theory. I also sometimes ask for my parents to explain their opinions to me.” – Tyson Johnston (USB ’23)

Do you think the generational gap within your families creates tension when/if you talk about politics?

“The only point that I find comes into contention is about the President’s effect on democracy in the US, with my mom being of the opinion that this resembles the time before the military coup in Chile almost 50 years ago.” – Nico Cefalu (USB ’23)

“Besides my mom and I, my family doesn’t really have discussions about politics. Current events and policies are mentioned at times, but we don’t debate them often. I wouldn’t say my family has strong political views. Of course, they have opinions, but politics are not a big part of their lives, and they are not very politically active.” – Sasha Zhang (USG ’23)

“It does create some tension, most noticeable at family events such as Thanksgiving, usually between my parents and others of their generation vs the older generations… I do think the political differences are less of a generational thing and more of an individual experience thing, because there are some exceptions. My uncle for example is part of my parents generation but his politics are much more conservative than others in the same generation.” – Tyson Johnston (USB ’23)