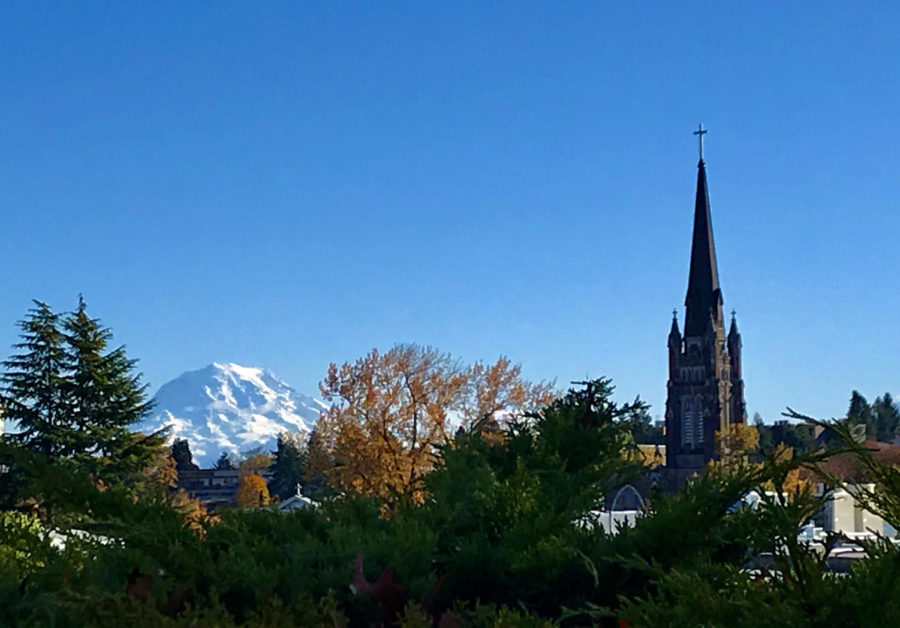 Although the height difference exceeds 14,000 feet, both Mount Rainier and Holy Rosary Catholic Church are significant elements of Tacoma’s skyline.

Two prominent points define the skyline of Tacoma: Mount Rainier, of course, and the spire of the Holy Rosary Catholic Church on South Tacoma Avenue. While the height difference between the two is over 14,000 feet, the latter is no less recognizable. For the residents of Hilltop and commuters on I-5, the church is a daily sight. Its everyday presence, however, does not lessen the magnificence of its Neo-gothic grandeur. Dedicated in 1921, the church celebrated its 98th birthday on November 21. It is uncertain, however, if the church will remain standing to see its 100th.

In 1875, a small group of Catholic German and Swiss immigrants raised the money to purchase a small plot of land just outside of town and built a modest-sized wooden church, which soon became the nucleus of the local German-speaking community. During World War I, when speaking German came to be considered unpatriotic, the service language switched to English. This made the service accessible to other Catholic communities, letting the congregation expand, and eventually outgrow the old wooden church. On Thanksgiving day in 1921, the community laid the cornerstone of the church Tacoma knows today, christening it Holy Rosary.

Constructed in the Neo-Gothic style at a cost of $175,000 (equivalent to over $2.5 million today), Holy Rosary has many intricate architectural elements inspired by medieval European cathedrals. The multi-point tower emulates the German Aachen Cathedral; the pointed-arch stained glass windows are shaped like those of Notre Dame.

The church has spent almost a century standing watch over the city, valiantly facing the elements. In 1949, a 7.1 magnitude earthquake struck Tacoma, leveling many buildings in the area. Holy Rosary, however, suffered only minimal damage to its spire. In 1965, ten days after Easter, the church weathered another earthquake, this one registering at 6.7 magnitude. The trembling caused the cross on the top of the 270-foot spire to detach and fall down, but it was quickly replaced. The church has survived more than just earthquakes: the construction of the I-5 freeway, originally planned to follow South Tacoma Way, would have cut through the site of Holy Rosary, necessitating its demolition. The outcry of Tacoma’s citizens led to rerouting it to its current course.

Since its formation by German and Swiss immigrants, it has served people of a variety of nationalities, reflecting demographic changes in the local Catholic population. Today an increasing number of its parishioners are of Mexican and Central American origin, along with a sizable membership of Vietnamese Catholics. Holy Rosary’s presence is just as prominent in Tacoma’s Catholic community as it is in its skyline. The church’s significance in the lives of its parishioners varies, but its character seems to make a lasting impression on all those who step inside. “The atmosphere, the reverent liturgy, the diverse community and the beautiful worship space all felt like home,” said parishioner Rebecca Gulino, “There is a uniqueness to the worship at Holy Rosary that I haven’t experienced elsewhere in Tacoma.”

On October 6, 2018, a section of ornamental sheetrock fell from the ceiling onto the pews of the choir loft below. After a week of heavy rain, the plaster below the cracked concrete-tile roofing had become saturated with water. Unable to support the weight of the sheetrock lining the ceiling of the sanctuary, it created a safety concern to the church’s parishioners. The church was fenced off around its perimeter, and has remained closed ever since. Mass was moved to the auditorium of Holy Rosary Bilingual Academy, which is on the same campus. Initially intended to be only a temporary relocation, Sunday mass has now taken place in the school for over a year.

After contracting out a nearly 800-hour structural assessment at a cost of over $15,000, the Catholic Archdiocese of Seattle, under whose jurisdiction lies Holy Rosary, released a statement detailing the church’s condition. The statement revealed that the structure’s deterioration was much more critical than previously thought. In addition to the cracked roofing, the assessor discovered a number of equally serious issues, all corollaries of the building’s age. A large section of brick supporting the roof wall has disintegrated and needs replacement. Several long cracks have formed in the concrete bases of the tower’s pinnacles, creating the concern that they may separate longitudinally. During the assessment, part of a molded concrete finial detached from its internal rebar structure, falling directly into the assessor’s hand. The conclusion was that it would cost roughly $2 million to reoccupy the building, in addition to $6.7 million in the near future to attend to other urgent structural issues, and $18 million to fully restore the church interior and exterior.

Archbishop of Seattle J. Sartain responded to the information on August 25 with a formal decree issued “by the grace of God and the authority of the Holy See.” “Regretfully, the cost to fully repair and maintain Holy Rosary church is simply too high,” wrote Sartain, “With deep regret and sadness, I authorize that the church building be razed due to its unsafe condition.”

How did the church building ever get to such a sorry state? Notwithstanding the parishioners’ dedication, the congregation’s ability to maintain the church is slowly slipping away. In 2017, for the first time in the church’s history, the number of funerals conducted at the parish exceeded the number of baptisms. Those still alive are increasingly less willing to give up their Sunday mornings to attend mass. And fewer attendees means fewer donors when the collection plate is passed around.

For the last five years, Holy Rosary has had a net operating loss of between $47,000 and $104,000. The church was just barely able to remain afloat during that time due to the generosity of one anonymous benefactor. He or she, however, recently passed away, leaving the church to experience the true weight of its financial situation.

Such hopeless financial trouble is not unique to Holy Rosary; membership attrition has weakened churches of all denominations across the US and western world. In many cases, this has led to the closure of churches and the demolition of historic buildings. The same is already true in Tacoma, where over the last 12 years, at least 3 other historical church buildings have been demolished.

First United Methodist Church, a grand, Gothic-inspired brick building that stood on MLK Jr. Way, was built to accommodate 1,150 people, making it one of the largest sanctuaries in the state at the time of its completion in 1916. In 2007 the church, its pews no longer full, was sold to MultiCare health service company and demolished to make room for an extension of Tacoma General Hospital.

The Scottish Rite Cathedral, which formerly stood in the Stadium District, was a tall, exotic and somewhat austere looking Masonic temple completed in 1922. Standing next door to the colossal, eye catching First Presbyterian Church, its sea foam colored contour was dwarfed and received little attention. Yet it too was quite unique: it was designed to be in art deco, neoclassical, and art moderne style, by the Sutton, Whitney & Dugan architecture firm — the same architects that brought Tacoma the Annie Wright Seminary building two years later. For a number of years it hosted part of the congregation of First Presbyterian next door, until it was demolished in 2017 to clear the way for a five-story apartment development.

Unlike an office or restaurant building, a church building cannot easily be adopted for another business; it either becomes a new church or is demolished. And the latter is increasingly the case. The closure of churches is simply a corollary to America’s progressing cultural secularization. Some churches are unremarkable structures that will be missed by few. But to many, a church such as Holy Rosary has inherent value if not simply as a place of worship, as an architectural, cultural and historical fixture of the community.

Holy Rosary’s influence extends far beyond even the shadow of its steeple. In 2018, the Saint Vincent de Paul Conference at Holy Rosary provided services to over 320 families in need across Tacoma. Should Holy Rosary close, the program would end.

“Holy Rosary Church is an icon, visual and emotional, on the landscape of the city and of the Catholic faith… To lose the history, the heart and soul of this Church, is truly unthinkable,” wrote church members Tim and Dawn Faker wrote in an open letter to Archbishop Sartain. The threat to Holy Rosary exemplifies a challenge to historic preservation across America: as church membership folds and ecclesiastical management can no longer take care of the church buildings, what will become of them?

After Notre Dame suffered its catastrophic fire in April, Parisians and French nationals expressed their deep emotions for the cathedral, which they rallied around not as simply a Catholic church, but as a symbol of France.

Similarly, after the Archdiocese’s decree in August, a group of Tacomans of all faiths joined together to protect Holy Rosary, forming the aptly named not-for-profit organization Save Tacoma’s Landmark Church. “We believe that having such a beautiful building adorning Tacoma matters to all Tacomans, not just Catholics,” board member Jonathan Carp said.

Holding bi-weekly meetings open to all, the organization has taken measures to fight the Archdiocese’s decree and spread awareness to garner support (and funding) for the church’s restoration. They hosted a spaghetti dinner fundraiser on October 26, and are holding an auction in January at Bellarmine Preparatory School. On their website, they offer yard signs and t-shirts for sale sporting the sleek silhouette of the church’s steeple.

Their publicity efforts have seen some success, bringing the church to the attention of influential Tacomans like Mayor Victoria Woodards. “This steeple has been a part of my life,” she said. “We’re going to work with the church to explore every opportunity we have.”

After sending a petition and appeal to the Archdiocese of Seattle, Save Tacoma’s Landmark Church received a response from Paul Etienne, who replaced Sartain as the Archbishop of Seattle. In a letter comprising over 250 words, he said surprisingly little. “I am neither denying nor granting recourse against my predecessor’s decree,” wrote Etienne, “I need time to speak with your leadership team, review the issues, and make an informed, thoughtful, and prayerful response.”

If the appeal to the Archdiocese of Seattle proves to be of no avail, then Save Tacoma’s Landmark Church plans to appeal to the highest figure up the ecclesiastical totem pole: the Vatican. But they hope they won’t have to. At this point, so much depends on the Archbishop’s “prayerful response” yet to come. Until then, the future of Holy Rosary Church remains uncertain.